The age old question, at least in the 80s, which one is better a Countach or a Testarossa? 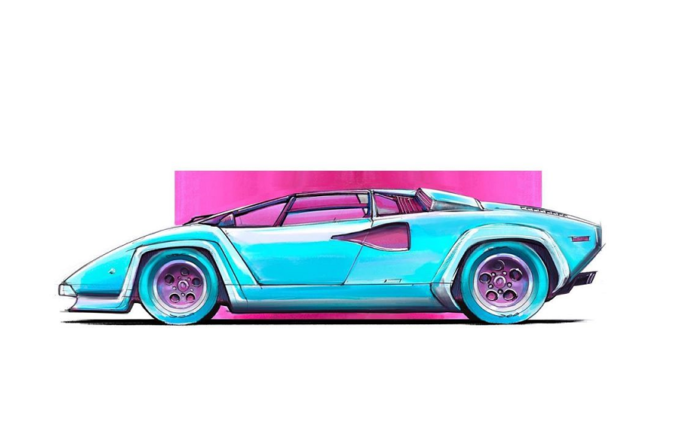 Back in the 80s, when I was at the age you think making fart noises with your armpit is the coolest thing ever, I also started to realize I can decorate my own room. Off I went to the poster shop, and while I was presented with a plethora of choices, I knew quite quickly what I wanted; a poster of a – then – brand new, white Lamborghini Countach. I mean, come on. Doors that go up? That rear wing? It was a no brainer. Back at home, when I pinned my first artistic statement to the wall, it felt good. The poster was a well deserved addition to my growing car toys, sorry, car models, collection, which was located on a shelf beneath it.

Only years later, watching one of my favorite Coen brothers movies, I understood what that feeling was. The Countach really tied the room together.

But of course, the 80s supercars scene wasn’t left alone for the Countach to charge. Just as I chose the Countach, so did other of my young petrolhead friends pick another 80s icon – the Ferrari Testarossa, which first went into production in 1984. The model became so popular, that it quickly starred in TV shows, such as Miami Vice and computer games, like Outrun.

And while the Countach was first introduced in 1974 with the LP400 model, and the LP 400 S in 1978, both it and the Testarossa seem to become the epitome of 80s supercars (and my apologies to the F40 fans or any other magaincant motoric creation of that era).

Kids had endless discussions on which one is better, based purely on looks, performance statistics and engine sounds. Unfortunately, growing up we still had to rely on these same parameters, as most of us never had a chance to drive either of these cars.

The situation hasn’t really changed, but if you truly want to appreciate this age-long rivalry, or just enjoy some relevant supercars aesthetics, we’ve compiled a list to help you do just that.

When it comes to car reviews, is there really any better than the holy trinity of The Grand Tour (formerly Top Gear)? In this clip, James May and Richard Hammond are taking the Testarossa and the Countach to a head to head drag race.

The IG home of Camilo Rios White aka “RIOCAM”, a prolific photographer who combines automotive shooting with the human body in creative ways. You are bound to catch up with some Countach and Testarossa photos, such as these ones, among other visuals.

These two accounts, who seem to be operated by the same person, are pretty straight forward. While the photos here are not restricted to just the Countach or the Testarossa, they certainly are the stars of the pages. Oh, and the retroferrari currently shows 144K followers compared to 118Kfor retrolamborghini…

Doug DeMuro’s review of the Countach

Duog’s videos are always fun and informative to watch. On this clip, he’s reviewing a 1989 Lamborghini Countach and contemplating the reasons you needed a mirror in Miami in the 1980s. Hmmm…

dbcarillustrations is the professional page of Diego De Barca Carretta, an industrial designer and illustrator from Chile. His IG page is full of beautiful automotive illustrations, and while most of them are not necessarily of our covered rivals, he did let me use the cool cover image for this post. Thanks!